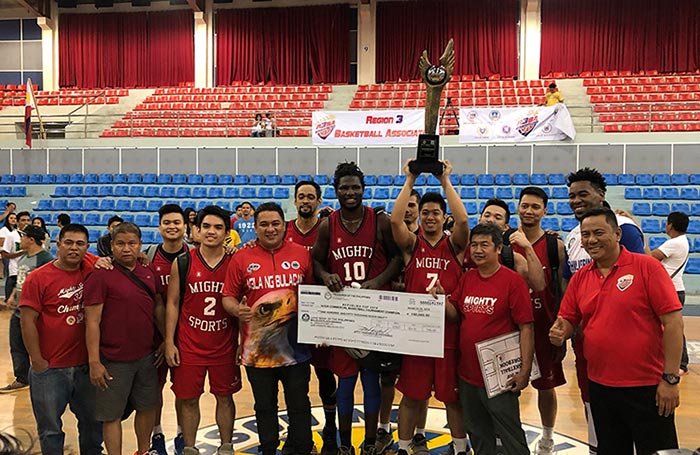 CAESAR Wongchuking and his Mighty Sports ball club reaffirmed their crown in a tightly contested match to conclude the 5th Republica Cup tourney held at the Malolos Sports and Convention Center.

They edged out Mighty Baliuag team 94-91 in the commercial division finals. Ola Adeogun finished with 22 points to lead Mighty Sports.

At the half, Baliuag trailed by only 3 points 56-59 after MJ Ayaay sank a 3-pointer right before the buzzer. In the third quarter, the two teams kept exchanging blows but Mighty Sports was able to fend off Baliuag’s short rally thanks to a scoring run by Paul Desiderio and Jamal Thomas.

In the fourth quarter, Baliuag was able to tie the game 84-84 after a barrage led by Ayaay and Chibueze Ikeh. But Adeogun made some crucial defensive stops to turn the tide for Mighty Sports.

In the closing seconds, Baliuag made a costly turnover leading to a Mighty Sports fast break and penalty shot for Adeogun.

“I would like to congratulate our coaching staff headed by coach Charles Tiu as well as our players for a well-played tournament. Mighty Sports will always support the sports programs of Mayor Christian (Natividad) and the municipality of Malolos,” team owner Caesar Wongchuking said.

Mighty Sports received a trophy and a P150,000 cash prize. Wongchuking said that his team also plans to donate the cash prize to a youth-oriented foundation.

The Republica Cup is an annual basketball league established by Malolos Mayor Atty. Christian Natividad in 2012 to commemorate the First Philippine Republic and as a means to promote local basketball talent.

Mighty Sports basketball team is owned by Mighty Sports Apparel & Accessories, Inc. a sportswear and accessories manufacturer that specializes in all types of sports such as basketball, soccer, volleyball, swimming, golf, and many more.